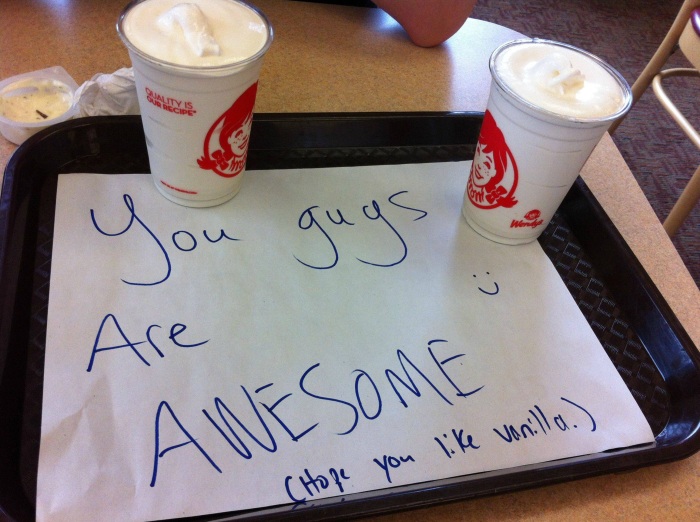 Bullying may conjure up images of school kids ganging up on each other on the playground, but adults are guilty of partaking in the nasty practice too – on the Web, in the workplace, and even at restaurants. Luckily, some bystanders aren’t looking the other way anymore.
When two New Jersey teens overheard a cashier getting an unfair earful from a customer, they spoke up. And it not only felt good, but tasted good, too.
On Sunday, Kailee Whiting, 19, shared her story on Reddit, writing: “Stood up for an innocent employee at Wendy’s who was being bullied by a customer. She gave us free frosties and chicken nuggets.” Whiting also posted a photo of the two shakes sitting atop a piece of paper that read, “You guys are AWESOME. (Hope you like vanilla.)”

“I thought it was really sweet of the cashier,” Whiting’s girlfriend, 18-year-old Katie Light, told Yahoo! Shine. “It was nice to know that she was happy that we stood up for her. Karma gave us something back.”
The two Rowan University students were standing in line waiting for their food at a Wendy’s restaurant in Franklin, New Jersey, when a woman in front of them started yelling at the cashier. There had been a power outage 20 minutes earlier, causing a backup in the kitchen, so things had become a bit hectic behind the counter. According to Light, the customer yelled, “If you weren’t ready to take my order, you shouldn’t have called me up!”
“We were very shocked that an older woman would even be so immature,” Light explained.

Whiting, who works in retail and at a diner in Sussex County, New Jersey, could empathize with the cashier; she explained to the displeased woman that working in the food industry is difficult and that the cashier was doing her best. Her words, however, weren’t so well received. The woman shoved her hand in Whiting’s face and told her to “shut up and stop talking,” according to Light.

“When we got our food, the cashier smiled and said, ‘Here’s your chicken nuggets.’ She gave us a free 16-piece chicken nuggets even though we didn’t order any. And when we were done, she came out with a tray of two Frosties just as a nice gesture … like, ‘Thank you for standing up for me.'”

The couple later found out that the frustrated woman called to inform the manager that the cashier gave away two free Frosties, but the manager reportedly didn’t mind.
And standing up to bullying has become a wider movement in recent years, with a much greater outcome than just getting some free fast food. In 2011, 14-year-old Jonah Mowry’s YouTube video describing his despair over being bullied for being gay went viral. It has received nearly 11 million views to date and has caught the attention of celebrities like Lady Gaga and Jordin Sparks. He recently posted a follow-up clip in which he illustrates how much his life has improved thanks to the support he received because of the original video.

That same year, the Weinstein Company came out with an award-winning documentary, “Bully,” that exposes teen bullying throughout schools in America. Since its debut, a number of anti-bullying campaigns, projects, and support groups have been created.

And in 2012, Michigan sophomore Whitney Kropp was elected homecoming queen, but her peers made fun of her on Facebook and the elected homecoming king gave up the crown. When a local Michigan resident found out, she created a Facebook page (that has since received more than 90,000 “likes”) to support Whitney, spread the story beyond the small town, and launch a fund to send Whitney to the dance.

The lesson here? It never hurts to speak up, and you’ll probably feel rewarded, free meal or not.